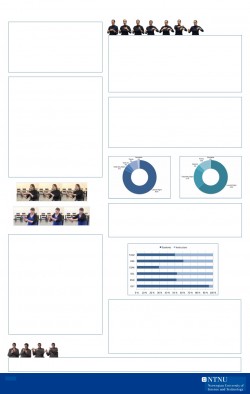 Research: Use of Space

Poster by Lindsay Ferrara and Anna-Lena Nilsson: Meaningful use of space: easy or hard for L2-learners?

There is a growing interest in the acquisition of signed languages as second or additional languages by hearing people even though it remains under-researched and largely anecdotal (see, however, McKee et.al. 2014). In this study, we adopt a usage-based approach to examine how hearing adults learners of Norwegian Sign Language express spatial meanings, with e.g. depicting signs and various types of buoys (Liddell, 2003).

Depicting signs, which are often used to describe the size and shape of entities, the movement of entities in space, and the arrangement of entities in space, have been described in the literature as both relatively easy even for hearing non-signers to understand and produce (e.g., Schembri, Jones, & Burnham, 2005; Marshall & Morgan, 2014), yet difficult for learners to acquire (McKee & McKee, 1992). We hypothesized in this study, that Constructed Action and buoys, which are complex constructions that use space meaningfully, may also pose a challenge for learners.

We first administered a survey to hearing college students learning Norwegian Sign Language about how they engaged with Norwegian Sign Language both inside and outside of class. We then asked these same students to complete several language-based tasks, which were video-recorded. These tasks involved giving directions to and from various places and describing where places and things were located. As a way to contextualize the students’ production, we then proceeded to video-record their Norwegian Sign Language teachers completing the same tasks. This research design reflects a usage-based approach to language acquisition by facilitating a comparison between the students' input and self-productions, contextualized by the self-reported survey data.

The resulting video-data was then annotated in ELAN, and for both datasets this process focused on identifying and characterizing depicting signs, pointing gestures, Constructed Action, and buoys, and examining their behavior in larger utterances. Additionally, in the student data, divergences as compared to the teacher data, as well as the use of gestures and language mixing, were annotated.

Analysis of these annotations indicate that students are able to use space meaningfully in their descriptions, even though they produce less variety regarding the types of depicting signs and engaged buoys to a much lesser extent than compared to their teachers. Interestingly enough, we see that learners sometimes physically distance their description from themselves, producing signs quite far away from their body (see Figure 1), whereas their teachers produce the same type of descriptions closer to their body. Findings also show that to compensate for their limited proficiency these intermediate learners recruit a range of communication strategies to circumvent difficulties. For example, students would language mix with Norwegian, by using mouthing or fingerspelling, and/or draw on their ability to gesture about spatial meanings.

This preliminary study shows that learning how to use space in a meaningful way is both easy and hard. Students are able, at some level, to do this but they lack native-like forms and the ability to co-ordinate perspective with different types of signs.